Last month I spoke at MediaCT’s friday afternoon session, I did a 90-minute talk about ‘Persuasion Tactics’. MediaCT organizes these sessions on a weekly basis for their employees, clients and whoever wants to join in.

During the afternoon I answered a few questions that may rise when discussing this topic.

Are we being influenced?

In their study on ‘The Nonconscious Effects of Scent on Cognition and Behavior’, Rob Holland, Merel Hendriks and Henk Aarts at Radboud University and Utrecht University discovered we can indeed be influenced.

They discovered that the mere exposure to the scent of all-purpose cleaner can cause people to keep their direct environment more clean than they would when they hadn’t smelled the citrus odor. When people were asked afterwards why they kept their environment that clean, no one had a clue why they did.

Chen-Bo Zhong and Sanford DeVoe proved it. Subliminal exposure to fast food logos stimulate haste and impatience, even when there is nu actual food around. Zhong and DeVoe did an experiment with 57 students who were asked to stare at the center of a computer sceen.

There would appear a stream of flashing objects At the corner of the screen. Students were asked to ignore these flashing symbols (only shown 12 milliseconds per object). Some of the students were shown logos of McDonald’s, KFC, Subway, Burger King and other fast food companies as part of the stream of symbols. Afterwards none of the students could tell what kind of symbols had appeared.

Then all participants were asked to read out a 320-word text about Toronto. Those who had fast food logos appear in the corner of their screens read the text in only 70 seconds while it took the others 84 seconds.

How do we decide?

This model by Petty and Cacioppo (1979) distinguishes two possible routes to persuasion. The central route is used when someone considers a message logically. The peripheral route when someone considers a message by using preexisting ideas and superficial qualities. Which route is used depends on both motivation as ability for someone to process the persuasive message.

Persuasive messages that go through the central route require a great deal of thought and consciousness, and therefore are likely to predominate under conditions that promote high elaboration. Someone has to be really motivated to process the message on its logical grounds through this route. Someone has to be able to process the message on these logical grounds (needs a certain educational level or knowledge of the specific topic).

Persuasive messages which are processed through the peripheral route are not likely to change attitudes or habits. They only cause short-term behaviour changes. Most of the tactics I spoke about are peripheral cues.

What are Persuasion Tactics?

At Concept7 we developed a model that decribes how we see the web. The whole thing started because technology was ready for it, but these days it is more and more designed to meet human needs.

Persuasion tactics are meant to encourage certain behaviour (often by taking away barriers). These tactics alone can change a specific behaviour. But to change an attitude or habit you would need a (persuasion) strategy.

‘Persuasion is an attempt to change attitudes or behaviors or both (without using coercion or deception).’
B.J. Fogg, Stanford University

In order to give more insight into how certain behaviours occur, I explained B.J. Fogg’s Behavior Model. The model describes three required elements for behaviour to take place: Motivation, Ability (Simplicity) and a Trigger.

How can we as designers for the web make use of Persuasion Tactics?

There’s lots of resources on the internet about utilizing Persuasion Tactics on websites. Below you’ll find some examples, lots more in the slides at the bottom of this presentation.

Credeble takes away barrier of time

Let’s imagine you’re motivated to make use of Credeble’s online service. The only problem is, you’re fed up with endless regsitration processes. By emphasizing the factor of time right below the call-to-action you may be triggered to register after all. ‘It’s free and only takes 20 seconds’ would influence your decision-making process. 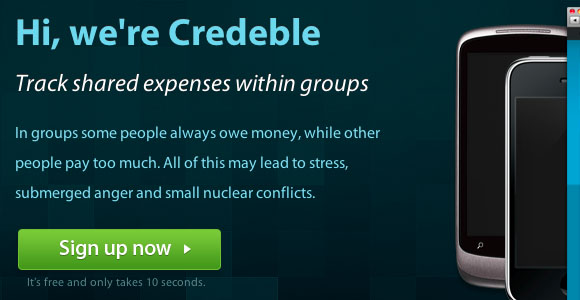 Dropfabriek (liquorice factory) uses the principle of framing to influence people’s behaviour on their website. By controlling the context they influence the meaning of the message. By placing a sold-out product in their line of products they suggest the products on their website are highly demanded. By showing the stock status of the other products, people are more likely to buy similar products. Professor Paul Messinger did a study on the influence of sold-out products on consumer choice. 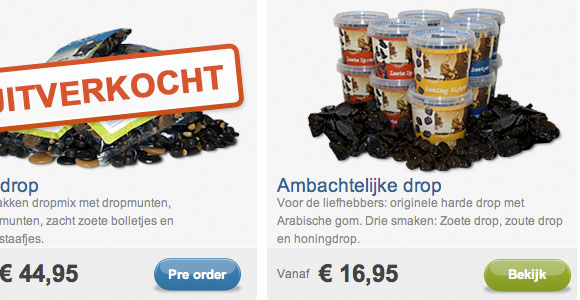 Check the slides at the bottom of this post for loads of other examples.

How far can we go?

There’s quite some discussions going on about ethical neutrality of persuasion tactics. I very much like Joshua Porter’s response on Twitter:’UCD is ethically neutral, while persuasion design is not? Not so. Ethics rests with the designer, not the method.’. Another great one by Arjan Haring:’The first rule of Persuasion Design is that every design is persuasive in some ways. There is no neutral way of designing something.’.

My colleague Stefan Wobben spotted some great examples of deception some months ago. Het wrote a post called Persuasion or Deception. Whether or not these examples were designed on purpose or not, they influence people’s behaviour in a way that can be argued…

You know very well when you use coercion or deception when utilizing persuasion tactics. In the end you’ll lose.